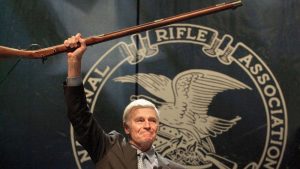 By 2000, the NRA had become even more closely aligned with the Republican Party and worked strenuously to keep Al Gore from becoming president. At the annual meeting in May of that year, Hollywood legend Heston provided what might be the signature moment in the history of the NRA. He spoke of a looming loss of liberty, of Concord and Lexington, of Pearl Harbor, the “sacred stuff” that “resides in that wooden stock and blued steel.”

Handed a replica of a Colonial musket, he said: “As we set out this year to defeat the divisive forces that would take freedom away, I want to say those fighting words for everyone within the sound of my voice to hear and to heed — and especially for you, Mr. Gore.”

He held the gun aloft.

“From my cold, dead hands!”